HOSTING "COOKOUTS" ALL OVER ARIZONA SINCE 1982.

We use real mesquite wood charcoal in our grills because it just tastes better. The unique flavor of mesquite cannot be matched by charcoal briquettes or gas grills. We serve our customers when our grilled meats are at their best. Right off the grill and onto their plate, just the way they want it. We believe that serving pans and chafing dishes take away from the quality and flavor of a cookout. Cookouts are what we do, and we take great pride in the way we do them. We are totally self contained and can travel to just about anywhere you would like to have a cookout. Our cookout services are available for any occasion that you might want. Anniversaries, weddings, rehearsals, birthdays, reunions, clubs, banquets, school events, and company parties are just some of the types of events that we have done over the years. Contact us to schedule a cookout for your event.

Reserve your cookout catering today!
CALL US AT (602) 717-8323 FOR CATERING IN CHANDLER, ARIZONA!
click here to view menu

THE BEST COOKOUT ARIZONA HAS TO OFFER! 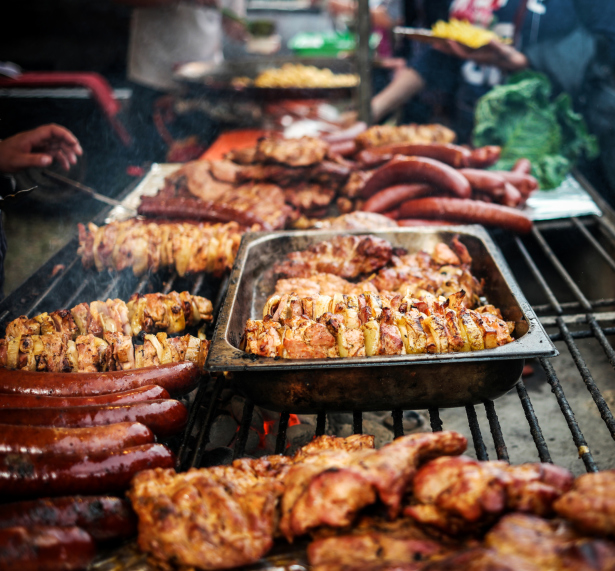 Burn’t Biscuit Cookout Company was originally started by longtime valley native J. Vernon Tuckey. “Tuck” as he was known to his friends, started the business while he was in the F.B.I. in Phoenix (1942-1978). The F.B.I. held training sessions at the Ben Avery Shooting range north of Phoenix. Back then the shooting range was about an hour from civilization, so they needed to take about 3 hours for lunch. Tuck was not one to take or allow a 3 hour lunch break. So Tuck put together a menu of Ribeye Steaks, Coleslaw, Fruit Salad, Cowboy Beans, and of course his “Dutch oven Biscuits” and with the help of the other agents they cooked lunch at the shooting range. The “Tuckey Steakfry” was born. Tuck and his agent volunteers did numerous other F.B.I. events like retirements, special occasions and the F.B.I. N.A. retraining session every year.

During this time Tuck was also a member of the El Zariba Shrine, and he and some of his friends in the shrine would do steakfrys for shrine functions. From these Shrine functions the term “Burn’t Biscuit” originated. The biscuits were cooked in dutch ovens over a charcoal fire. Being a Shrine function, libations were being served and consumed. And so, a good time was being had by all, including the cooks. As a result, the combination of fire and libations did sometimes resulted in “Burn’t Biscuits”. After a few of these functions, the cooks all started wearing a “Burn’t Biscuit” on a chain around their necks while they cooked. The “Tuckey Steakfry” idea caught on with members of the Shrine and Tuck was being asked to cook for more groups and parties than he could accommodate.

Tuck retired from the F.B.I. in 1978 and then had more time to devote to doing the Steakfry’s. He continued to put on Steakfrys for the F.B.I. functions after his retirement as well as other law enforcement agencies around the state of Arizona. Between the F.B.I. and Shrine, Tuck had a bunch of different guys that would help him cook. He named his crew “The Burn’t Biscuit Bunch”. Tuck continued to run the Burn’t Biscuit Bunch until 1988, when he turned over the business to some of his younger members of the bunch.

At this time the name was changed to “Burn’t Biscuit Cookout Company”, to more reflect what we do. Though the name was changed, the foundations on which Tuckey started the business remain the same. The people that Tuck cooked for were friends of his and he wanted them to remain that way. So he used quality food, cooked on-site, and kept the price reasonable. Today, our goal is to keep up Tuckey’s tradition. We still proudly serve many of the same people that knew Tuck, and that’s the way we want to keep it.

Food was soooooo good:) And my company president was so happy for the flavorful cookout they brought to us.

We will keep on working with them. Oh price the price was amazing, I have been catering from different places for our company for 3 years, they have the best price.
— snow s.

Fantastic BBQ Catering. I would highly recommend Burnt Biscuit. The food was delicious, the service is excellent, the timing and preparation was perfect with our serving time! Excellent company. I would use them again!
— anna marie

They came prepared with everything. I didn't have to lift a finger and our guests were impressed and full. The bbq ribs & chicken was a hit as well as the FRESH fruit (I expected canned) and home cooked baked beans. We couldn't have hosted a more successful event for twice the money we spent. Thanks to Rod and Burnt Biscuit
— mary

Thank you! Your submission has been received!
Oops! Something went wrong while submitting the form